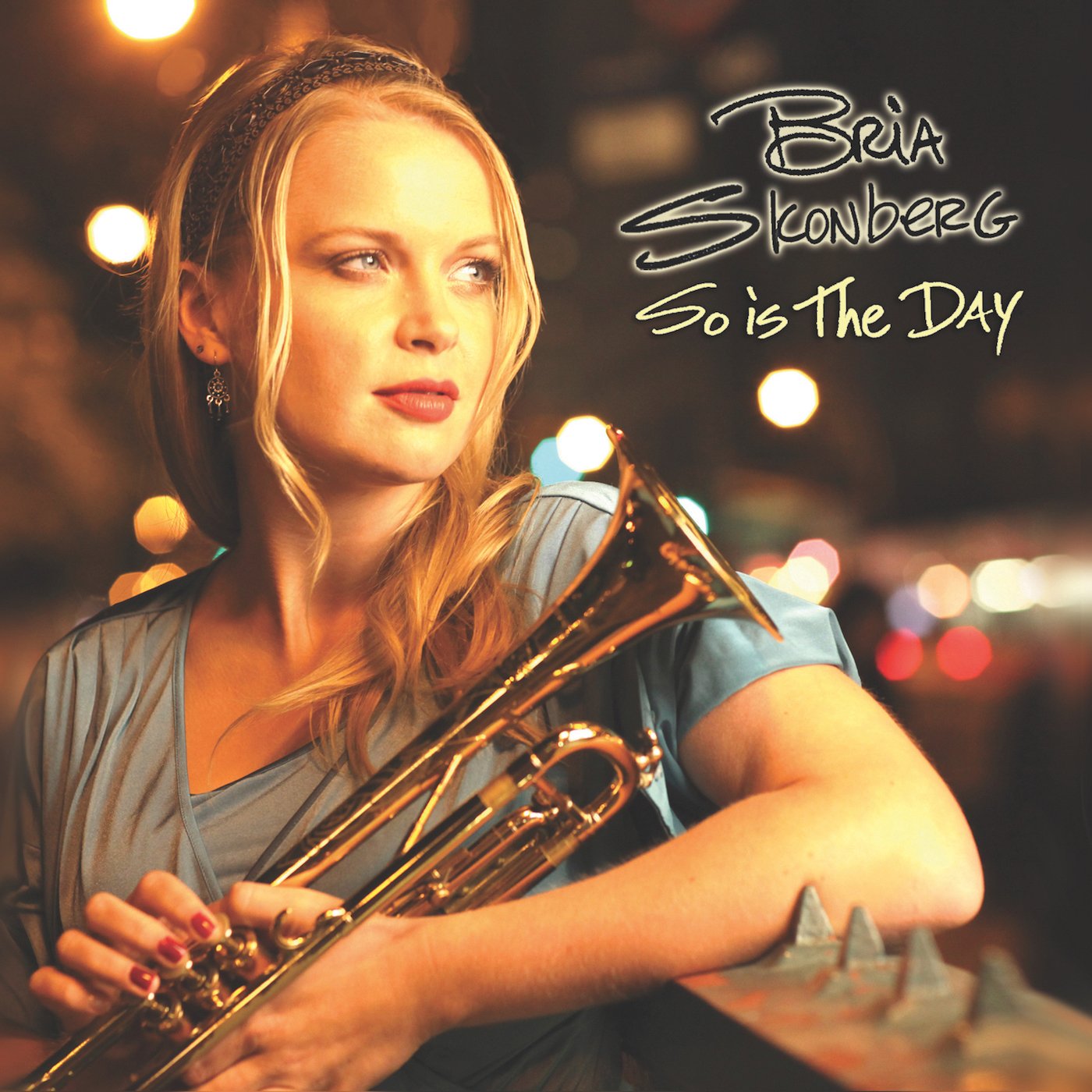 Canadian Singer, Trumpeter, Songwriter, Arranger and Bandleader BRIA SKONBERG is described by The Wall Street Journal as one of the most versatile and imposing musicians of her generation. Recognized as a Rising Star by Downbeat Magazine, and the recipient of numerous honors and awards worldwide, Bria is indeed a musical force. Wielding a unique blend of modern millennial sensibilities and sizzling old-school musicianship, her American debut, SO IS THE DAY, surrounds the neo-New Yorker with an all-star cast.

Bria offers several of her own beguiling songs, including: The swampy title track, a clarinet feature; a swinging feminist anthem (Keep Me In The Back Of Your Mind); the odd-metered, Jazz Messengers-like instrumental Hip Check; the drop-dead gorgeous bossa Have A Little Heart; a funkified Penny In Your Pocket, allowing Lashway to stretch his chops on piano; the Dixieland homage to her Canadian hometown, Chilliwack Cheer; and the unforgettable closer, My Friend, featuring only Brias voice and Lashways gospel-tinged piano accompaniment. The cover tunes are just as inventive: Joni Mitchells hit Big Yellow Taxi is given a Caribbean flavor, with a fine Flugelhorn solo; classical composer Erik Saties instrumental piece Gymnopedie is an Afro/Cuban stomp, with a superb trombone solo by Michael Dease; and Irving Berlins Let Yourself Go is transformed into a slinky/funky/swampy/sexy slide. The incredible John Pizzarelli does a guest star turn on Brias own I Wish I Hadnt Forgotten. Their voices are extremely complimentary on the swinger, and John offers a great guitar solo.

So Is The Day backs up the claims by ''The Wall Street Journal'', where esteemed critic Will Friedwald also wrote that Bria Skonberg looks, and sings, like a Scandinavian angel, but plays like a red-hot devil!

It's a rare talent that can straddle - and dare request membership in - the trumpet artist continuum emanating from Louis Armstrong and progressing down through his ''Neo Orleans'' progeny: Byron Stripling, Wynton Marsalis and Nicholas Payton (whose big band trumpet section Skonberg graces). However, with her bravura performance on So is the Day, Bria Skonberg confirms that she is not only indeed a triple threat musician - player, vocalist and composer - but also that that esteemed lineage, consummate entertainers all, would heartily approve her membership. She exhibits stylistic shades of Peggy Lee, Dinah Washington, and Diana Krall. She has a beautiful voice - both soul sultry and innocent sweet - and an instrumentalist's feel for melodic line and rhythm. Her vocal and horn chops intertwine seamlessly. An insight-fully versatile composer, Skonberg delivers nine engaging originals, all stylistically unique. So is the Day, while tipping a hat to tradition, appropriately pushes Bria Skonberg to the forefront of today's musical talents. She has it all - so does this superb recording.

Nicholas F. Mondello --All About Jazz

On her debut (U.S.) recording, trumpeter and vocalist Bria Skonberg makes a diverse musical statement...it's clear she's up to more than nostalgia. On trumpet, she's been nurtured in the pre-­bop traditions but stretches beyond to more modern approaches. Her singing chops may remind of Norah Jones...and she's excellent in the duo with veteran John Pizzarelli.

The pandemic slowed the emergence of trendy new flavors and ingredients, but futurist Liz Moskow sees innovation ahead.

The multiple Fat Brands is paying for the casual dining chain has raised some eyebrows. But it is indicative of a deal that is different from the company’s other acquisitions, says RB’s The Bottom Line.

The FTC is reportedly looking into issues related to their repair. Yet franchisees say social media attention is just as big of a problem.

As summer wraps up, fall menu launches speed up

Why many restaurant employers should be fed to lions

The former NBA star’s fast-casual chicken concept is getting into ghost kitchens, franchising and cruise ships, all the while finding the best ways to leverage its famous founder’s image.

A lot of companies made overly aggressive bets on unproven fast-casual concepts. PizzaRev was one of them, says RB's The Bottom Line.

Why many restaurant employers should be fed to lions

The industry is in denial about a key reason why employees are quitting at record levels. And, no, it's not all about government aid, says RB's Reality Check.

Dutch Bros wants to raise $400M in its IPO

The drive-thru coffee chain set terms for its offering, which would give the company a valuation of over $3 billion.

Michigan aims to cure a social ill of meal delivery

The state is teaming up with a charity and the Kiwibot robotics company to bring delivery within reach of more consumers and small businesses.

"A Deeper Dive” is a weekly podcast from Restaurant Business dedicated to going in-depth on the most pressing challenges and opportunities restaurant operators face today, hosted by Editor-in-Chief Jonathan Maze.

Host Heather Lalley, Senior editor at RB, talks with the founders and CEOs of emerging brands to discuss their opportunities, challenges and strategic innovations. Look for a new episode released every other Tuesday.

“Menu Feed” is a biweekly podcast hosted by Senior Editor Patricia Cobe that delves into menu development and food and drink trends through lively conversations with chefs and operators.

How We See It

It has also outsourced the duties of CFO and is looking to sell its lone remaining business, a foodservice management company.

What cities are leading the restaurant industry's recovery?

If you're in a Southern market, it could be yours, according to a new study. But gird yourself if you're in Washington, D.C.

The 423-unit chain has seen a quick recovery from the pandemic and would be the industry’s third offering of 2021.

The former NBA star’s fast-casual chicken concept is getting into ghost kitchens, franchising and cruise ships, all the while finding the best ways to leverage its famous founder’s image.

The industry lost 41,500 jobs in August, ending a long period of growth, as the delta variant strikes around the country.

The FTC is reportedly looking into issues related to their repair. Yet franchisees say social media attention is just as big of a problem.

The pandemic slowed the emergence of trendy new flavors and ingredients, but futurist Liz Moskow sees innovation ahead.

See the full ranking of the Top 100 concepts, which account for more than $1.8 billion in annual revenue, and learn how they are putting hospitality first.

Peter Romeo highlights the moments restaurateurs miss at their own peril

As restaurants begin to reemerge, one year since it all began, Restaurant Business takes stock of the massive changes the virus has brought.