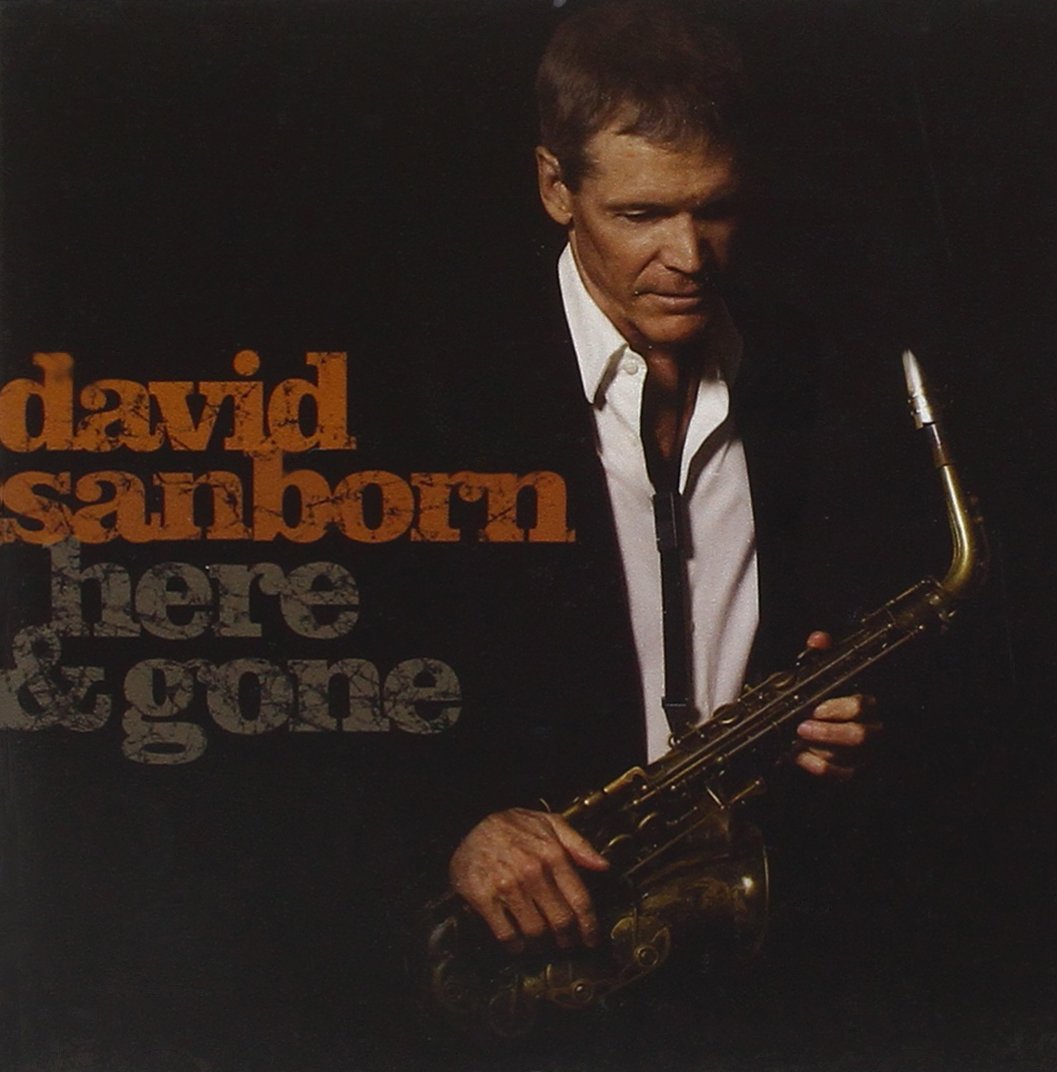 Here and Gone is a tribute to the sound of Hank Crawford, David "Fathead" Newman, Ray Charles, etc. Backing Sanborn are Steve Gadd (drums) and Christian McBride (bass). Guests include Eric Clapton, Joss Stone, Sam Moore, Derek Trucks and Anthony Wilson. Here and Gone was produced by yet another legend and longtime friend: Phil Ramone. "Joss is a real phenomenon," Sanborn says. "It takes a forceful talent to take a song "I Believe It to My Soul" that Ray Charles not only wrote but really defined and put your own identity on it." Sanborn, who has been friends with Eric Clapton for many years and a collaborator with him on several previous projects, asked Eric to play on Percy Mayfield's "I'm Gonna Move to the Outskirts of Town." "Fortunately he agreed not only to sing on it but play on it! But he's got such a great understanding of what the music is about and the way it should be presented." Sanborn's song selection - like "I've Got News For You" which features Sam Moore of Sam amp; Dave fame - gives the listener a glimpse to his sense of humor. From the Label

The six-time Grammy winner has consistently recorded his own albums: Since his first album "Taking Off," from 1975, through his acclaimed "Closer," from 2005, he has rarely gone over two years between releases. But it's been three years between "Closer" and Sanborn's hew album "Here and Gone." Produced by the legendary Phil Ramone, it is the 23rd solo album in Sanborn's extraordinary career, and brings together exceptional guests in Eric Clapton, Sam Moore and Joss Stone, along with such fellow stellar instrumentalists as guitarists Anthony Wilson and Derek Trucks, trumpet virtuoso Wallace Roney, arranger/keyboardist Gil Goldstein, bassist Christian McBride and drummer Steve Gadd. But "Here and Gone" is noteworthy, too, for its concept. Sanborn was inspired by soul-jazz saxophonists like David "Fathead" Newman, Hank Crawford, Gene Ammons, Arnett Cobb, Illinois Jacquet, Jimmy Forrest, King Curtis, and Willis "Gator" Jackson. But he was also influenced by the Chicago blues legends who regularly performed in St. Louis, and by the time he graduated high school he had already played with Albert King and Little Milton. Sanborn's first career break, in fact, was joining the Butterfield Blues Band--which historically mixed Chicago blues with a soul band horn section. Following five years with Butterfield, he then established his world-class solo stature in the 1970s in jazz and ramp;b/pop/rock through heavy touring and ensuing recording dates. But it is fellow blues/ramp;b alto saxophonist Hank Crawford whom Sanborn turned to in conceiving "Here and Gone." Crawford is directly responsible for three of the album's nine tracks. He wrote "Stoney Lonesome"--"the definitive Hank Crawford tune," notes Sanborn, explaining that "it's in a place between gospel, ramp;b and jazz that both he and Ray inhabited so well." The ballad "What Will I Tell My Heart?," which Sanborn first heard via Crawford, "illustrates what I learned from Hank: Take your time when playing a ballad! Don't hurry, but let the song develop and tell you how to play it." Then there is Percy Mayfield's masterpiece "Please Send Me Someone to Love," another song that Crawford recorded that is "quintessentially Hank in the economy of the arrangement." The rest of the album continues a close connection with Ray Charles, whose 1960 album "Genius + Soul = Jazz" supplies three more tracks including "I'm Gonna Move to the Outskirts of Town," another Mayfield gem. Sanborn then culled the Charles original "I Believe It to My Soul" from Charles's 1961 album "The Genius Sings the Blues," and marvels at the job guest vocalist Joss Stone did on it. Sanborn first recorded Marcus Miller's Charles tribute "Brother Ray" on his Miller-produced 1999 album "Inside." He included a new version on "Here and Gone"--with a spectacular guitar assist from Derek Trucks. Crawford and Charles are joined by keyboardist/arranger Gil Evans as Sanborn's three biggest influences, and it's to Evans that he turned to in cutting jazz standard "St. Louis Blues"--the lead track on "Here and Gone." Here Sanborn also credits producer Ramone, who had produced his second album "Sanborn" in 1976, "so we have a real history." Ramone, he adds, "has an innate understanding of what this music is about, and better than anybody understands how to create an atmosphere conducive to maintaining its vitality and spontaneity and preserving its spirit." And saluting Wallace Roney, whose trumpet solo embellishes the end of "St. Louis Blues," he further notes that his albums "are all about casting. "I was very honored to have such an incredible array of guest artists on the album," notes Sanborn, "who really round out the sound of this record."